A synthetic material, boron nitride (BN) occurs in two modifications. On eis the hexagonal BN (α-BN) that shows a graphite-like layer structure. However, in contrast to graphite, BN shows a white color, thus it is often called "white graphite". The other is the dense cubic BN (β-BN)with a structure similar to that of diamond. 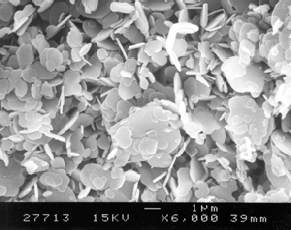 BN was first prepared on a large-sclae basis by Union Carbide and Carborundum in the 1950s. Today, the following three general reactions are used for the synthesis of α-BN using Boroc oxide (or boric acid) and a nitrogen-containing compound:

BN production figures are not listed separately in statistical reports; however, we estimate the 2000 production for the Western world of about 350-450 metric tons. Production figures will be similar for 2001 with a slight increase possible. Also, there is a BN production in the Commonwealth of Independent States (CIS) and China, but no reliable production data are available.

Prices for hexagonal BN range from ∼$80-120/kg for Standard qualities depending on purity of BN, and may reach prices up to $200-400/kg for high-purity and tailor- made grades. Because there is a large demand and shortage for BN at present, price increases are likely in the near future.

For ceramic applications, the hexagonal modification is used because of its outstanding chemical, thermal and electrical properties. It finds application in the metallurgical field because of its good non-wetting behavior against metallic melts. Further applications are high-temperature solid lubricants because of its layer lattice and thermal conductor/electrical insulator in electronic applications. Large quantities of BN are used for the production of engineering ceramics like brake rings for horizontal continuous steel casting and TiB₂/BN composites used as evaporator boats for vacuum metallization.

Other applications indude those in the fieid of cosmetics, as catalysts and as a starting material for the production of cubic BN. Due to its extreme hardness, second to diamond, cubic β-BN is used as a hard material.

The good non-wetting behavior as well as the good high-temperature lubrication make BN an ideal release and parting agent for the production of aluminum and magnesium Castings as well as glass forming and superplastic forming of titanium sheets for aerospace applications. In these applications boron nitride is used as a dispersion in a carrier (water or alcohol) blended with refractory binders, that are applied like wall paint. Such coatings are produced by Advanced Ceramic Corp., Carborundum Co. and ZYP Coatings Inc. in the United States and by Elektroschmelzwerk Kempten and Büro für angewandte Mineralogie in Germany.

These recommendations are believed to be correct. However, no guarantee of their accuracy is given. Therefore, purchasers shall make their own tests to determine suitability for their use. These products are offered for industrial and related uses (e.g. research and development) only. However the user must take the necessary precautions appropriate for products containing chemicals. This description does not imply the absence of any patents, the responsibility whatsoever solely rests with the user.